As the battles raged on for the recapture of icy mountain tops from the enemy in Batalik, Kaksar, Dras and Mushkoh Valley sub-sectors of Kargil district, the war cries of a dozen Indian Army regiments rent the thin air many times daily — striking terror in the hearts of the enemy. “Jo bole so nihal; sat sri akal!” was the famous war cry of the Sikh Regiment and the Sikh Light Infantry and of some battalions of the Punjab Regiment. It reverberated with chilling effect on the enemy on the battlefields of Afghanistan, Europe, Africa and Myanmar, during both World Wars and, of course, during the post-Independence conflicts on India’s borders.
The Gorkha battalions charge the enemy with their khukris flashing, as cries of “Ayo Gorkhali” electrify the air. The sight of the deadly Gurkhas storming an enemy position through a hail of bullets and shrapnel, sharp-edged Kaukris raised high above their heads, is usually too much for even the most lion-hearted to bear. Enemy soldiers have seldom been known to relish the thought of a hand-to-hand fight the Gorkhas — they prefer to abandon their posts and flee. While the ]at Regiment goes into battle with “Jat balwan, Jai bhagwan” as its war cry, the Bihar Regiment invokes the blessings of a revered deity: “Bajrang Bali ki Jai”.
War cries have traditionally been instituted to rally men in battle, to inspire courage among a body of troops assigned a Herculean task, and to generate a feeling of camaraderie and togetherness to overcome the disorientation and loneliness that the modern battlefield invariably creates in the human breast.
The strength is so crucial to the achievement of the desired goal during infantrymen’s charge to wrest a given objective from the enemy under withering fire. And, nothing evokes a more overwhelming sense of unity, or a greater sense of purpose, than the full-throated shouting of a well-practised war cry.
Every unit of the army has its own war cry whether it belongs to the fighting arms or to the services. Since most army units have a ‘mixed’ class composition today — comprising soldiers from all corners of India —unlike the ‘fixed’ class regiments of yesteryear, war cries abound.
On taking over as the commanding officer of an artillery regiment in Kashmir Valley in early 1993, I was intrigued by the uniqueness of the regimental battle cry, which also doubled as a motto. “Veer Bhogya Vasundhara” — the brave shall rule the earth — summed up the essence of soldiering and appeared to bestow an ethereal nobility on one’s calling. While our war cry undoubtedly placed valour in battle on a high pedestal, it simultaneously went far beyond mere physical courage and urged moral responsibility in thought and deed. I found it inspiring and resolved to ensure that the men understood it well so that it could be a motivating force during both war and peace.
The war cry, as is customary, was plastered all over the regiment. During a round one morning, I asked a young sentry on duty at the Quarter Guard if he knew the meaning of Veer Bhogya Vasundhara. “Yes, sir,” he replied promptly. “It means that the bravest man will get the prettiest girl.”
The Subedar Major started to correct the jawan. I quickly restrained him. Nothing can be more motivating for a young soldier than the thought of getting a pretty bride if he is brave. If that is what the war cry meant to him, so be it. The aim was achieved.

Like in Gulf War I, Kosovo and in Afghanistan, the first deadly payloads in Gulf War Il were delivered from the air - by coalition air force, including, the air corps of the US marines, land-attack cruise missiles attack helicopters and smart artillery shells. In the ultimate the analysis the Powell...

When asked, US officials normally point to India joining international counter-terrorism and counter-proliferation efforts; sharing intelligence; upholding the rules and norms governing maritime trade; providing help to the littoral states to meet their security needs; helping to counter piracy and... 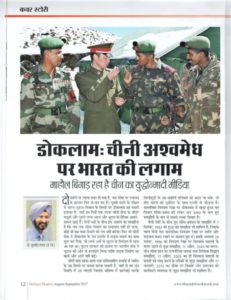