UNITED NATIONS (UN) peace-keeping missions bring together a large number of army contingents and civilians from various corners of the world. The famous “Blue Berets”, respected the world over as harbingers of peace, and honoured with the Nobel Peace Prize, are joined by civilian UN women and men with diverse cultural backgrounds, in a strife-torn environment under what are almost invariably primitive conditions of existence. Success and survival depend upon the early cementing of bonds of friendship and cooperation in a mutual spirit of give and take. Towards this end, each mission quickly develops customs and traditions to encourage camaraderie and esprit de corps. Indeed, every UN mission has a work-culture and ethos uniquely its own.

Over the last fifty years of peace-keeping, many traditions common to almost each mission have evolved. One such cherished — practice is that of “Happy Hour” —looked forward to with relish and remembered with nostalgia.

Late afternoon on a particular day each week, all the staff members posted at a station get together at the Officers Mess for a round of drinks and to catch up with the news from other outposts. The first drink and snacks arc usually on the house —paid for out of the bar profits for the week. The occasion gives an opportunity to the peace-keepers to meet each other in a relaxed and friendly atmosphere and to generally let their hair down in the company of their peers, as against having to maintain a prim and proper demeanour in public as ambassadors of goodwill and peace. It is also an occasion to bid farewell to those who are on their way home on completion of their tour of duty, to welcome new members to the mission, and to offer collective good wishes and support to colleagues on birthdays and wedding anniversaries so that the pain of separation from family and friends on such joyous occasions can be lessened to some extent.

During our mission in Namibia (UNTAG, 1989-90), Happy Hours at Windhoek were always looked forward to with joyous anticipation. These were held at the Suiderhof Officers Mess and were a big draw with the civilian UN staffers, particularly the ladies. “They usually lasted much longer than an hour and were marked by much back-slapping, exchange of mission gossip, raucous laughter and occasional bouts of singing. During a memorable Happy Hour, a proud Blue Beret and young UN lady announced their engagement and a spontaneous party followed, ending in a rather high-spirited jam session.

Occasionally, our Force Commander, Lt. Gen. Dewam Prem Chand, an old “peacehorse”, would drop by and regale everyone with his witty and humorous anecdotes. With his thoroughly professional handling of his responsibilities and charming personality, he had earned the respect and admiration of all members of the mission. During one such occasion, he narrated this story of happy Hours at another time, another place.

During Gen. Prem Chand’s tenure as the Force Commander in Cyprus in the early 1970s, Mrs Prem Chand took a fortnight’s holiday in India to meet family and friends. When she returned to Cyprus, she was keen to catch up with all that had transpired in her absence. As the General was away, she asked his secretary to show her the General’s engagement diary. Listed on the date of her departure for India, she found these two entries 4.00 p.m. — Departure Mrs Prem Chand; 4.30 p.m. — Happy Hour! 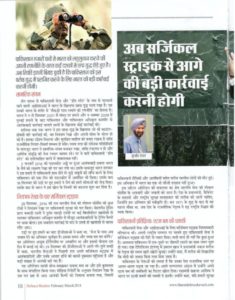 Regardless of what term is used to describe the war form of the future - besides cyberwars, the other terms in vogue include knowledge warfare, information warfare and command and control warfare - jt is clear that an information and knowledge driven new type of war-form has emerged.

His hypothesis is simple and straightforward: "The fundamental source of conflict in this new world will not be primarily ideological or primarily economic. The great divisions among humankind and the dominating source of conflict will be cultural. Nation-states will remain the most powerful actors...