Like in Gulf War I, Kosovo and in Afghanistan, the first deadly payloads in Gulf War Il were delivered from the air - by coalition air force, including, the air corps of the US marines, land-attack cruise missiles attack helicopters and smart artillery shells. In the ultimate the analysis the Powell doctrine of overwhelming force, including the use of large land armies to win wars lost out in Iraq to the new Rumsfeld doctrine emphasising lean and mean armies, advanced weapons, technology, special forces units and sheer brainpower to defeat future foes.

Though the March-April 2003 war in Iraq was one-sided, it provided several glimpses of the coming of age of the ongoing revolution in military affairs (RMA). The coalition forces, particularly the United States military units participating in the war, were almost fully networked and relied on state-of-the-art reconnaissance, surveillance and target acquisition (RSTA) technologies for what is increasingly being called “effects-based targeting”. The coalition aim was not to cause maximum attrition to Iraqi forces, with its attendant collateral damage, but to generate specific effects to further the military aim.

In the evolving tactics, techniques and procedures of the RMA now well under way, the mass of enemy forces, that is tanks and mechanised infantry combat vehicles, is no longer considered the most vulnerable and operationally important asset of the enemy. Due to greater reliance on automation, attention is increasingly shifting towards neutralising enemy RSTA, command and control, communications and intelligence (C31) systems, long-range fire delivery means, particularly rocket launchers and surface-to-surface missiles and logistics bases and choke points on lines of communications.

The US-led coalition forces correctly assessed that the successful destruction of Iraq’s air defences, command centres, RSTA and firepower assets and the disruption of its intelligence and communications systems would render it incapable of fighting effectively. The aim was to paralyse Iraq’s war machine by carefully planned targeting. Hence, these elements were the primary targets in the early stages of the campaign. As has become the norm since the Gulf War of 1991, precision-guided weapons (PGMs) delivered from the air were the weapons of choice.

The silver bullets of Gulf War II were undoubtedly the plethora of PGMs and improved conventional munitions (ICMs) that are increasingly replacing “dumb” bombs in western military inventories. During the 1991 Gulf War, despite all the CNN-generated hype of smart bombs flying unerringly through ventilators. PGMs formed less than 10 per cent of the total high explosive dropped over Iraq and were rather inaccurate. The collateral destruction of an air raid shelter harbouring women and children was the low point of how technology can be wrongly employed. The coalition forces did not destroy a single Iraq Scud missile launcher. In Kosovo, PGMs accounted for about 30 per cent of the ordnance dropped and accuracies improved considerably.

In the post-11 September retribution inflicted on the Taliban militia and its Al Qaeda supporters, the share of PGMs rose to nearly 60 per cent. During Gulf War II in March- April last year, over 70 per cent of all war heads were PGMs. As weapon systems researchers continue to gain mastery over the technology curve, the single shot kit probability of PGMs is growing steadily even as costs are coming down and future wars are likely to witness an even greater proliferation of PGMs on the battlefield.

In conventional warfare, the first decade of the 21st century is likely to go down in military history as the age of air-to-ground weapons. Among these, the battle-tested but still evolving joint direct attack munition (JDAM) is likely to be the front-runner. It is guided to its target by signals from the global positioning system satellites continuously orbiting the earth. Programmed with the satellite coordinates of a target, the JDMA has been observed to land within 70 meters of its aiming point more than 60 per cent of the time. This is very high accuracy for a dumb, free-fall 1,000 or 2,000 pound bomb that has been retrofitted with guidance kits. JDAMs can be dropped from heights of almost 10,000 meters and standoff instances of more than 20 km, having pilots added safely from ground fire.

Compared with the $1 million price tag of land-attack, Tomahawk cruise missiles, the JDAM modification kit costs less than $30,000 and makes it extremely cost effective. During the recent Afghanistan conflict, on average the US dropped 3000 GPS guided JDAMs every month, However, less than 20,000 JDAM kits were available with the US Air Force in October 2002 and the Boing Company was asked to step up production to 2,000 kits every month in order to stock up for the planned invasion of Iraq.

The bunker-blasting GBU-24/28 laser-guided air dropped bomb was used extensively against underground command posts, communications modes and living shelters. Going through the concrete slab that provides overhead protection to a bunker, this bomb is known to penetrate about 30 metres of soil and rock before exploding. For what the US army calls hard and deeply buried targets such as storage sites for weapons of mass destruction and command and control centres, the US had refused to rule out the use of nuclear weapons. A special penetrating warhead was under development for this purpose. However, Saddam’s forces capitulated too soon for it to be required.

Microwave bombs, part of the growing family of directed energy weapons, that emit powerful pulses of energy to destroy electronics systems were also fielded, besides existing radar-homing bombs that latch on to the radiation emitted by active radars. However, information about these is still sketchy. A single microwave device on board an attack aircraft is capable of neutralising 100 targets with 1,000 pulses of high-intensity energy on a single sortie. US military scientists had used a related technique to fairly successfully disable Yugoslavian power grids during the Kosovo campaign.

To destroy chemical and biological weapons stockpiles without the deadly agents being released into the atmosphere, scientists have developed a new, radical bomb called a “thermobaric” bomb that was tested in the caves of Afghanistan. Also known as a “vacuum bomb”, it is a two-stage explosive device that combines a high-temperature incendiary fireball with overwhelming blast pressure. The superheated gases generated by the thermo-corrosive reactive filling are designed to destroy the chemo-bio agents without the confined space of the target. Though efforts are under way to develop air-delivered thermobaric bombs, at present these can be fired mainly from shoulder-fired rocket launchers carried by special forces teams specially inserted behind enemy lines and from tank guns.

Like in Gulf War I, Kosovo and in Afghanistan, the first deadly payloads in Gulf War Il were delivered from the air — by coalition air force, including, the air corps of the US marines, land-attack cruise missiles attack helicopters and smart artillery shells. However, predictions of a mix of 3,000 missiles and PGMs in the first 48 hours did not come true as the war on the ground began soon after the failed decapitation attempt on Saddam Hussein by B-1B Lancer bombers. Radar-eluding B-2 Stealth bombers, B-1B Lancets and B-52s attacked Iraq from bases in the continental US, the United Kingdom and Diego Garcia. Carrier battle groups positioned in the Persian Gulf and the Indian Ocean launched Tomahawk cruise missiles to neutralise Iraq’s air defences.

Close air support to the ground forces was provided by A-10A Warthog of the US air force and the AV-8B Harier II of the Marine Corps. GPS navigation devices enabled pilots to fly accurately and distinguish between friendly forces and the Iraqi dispositions. AN/AAQ-28 Litening Laser designation pods were used to guide bombs at night and during bad weather. The E-3C Sentry airborne warning and control system aircraft provided command and control guidance. Apache helicopters firing Hellfire missiles and rockets supported every assault and successfully pursued the fleeting Iraqis. For better coordination, Iraqi territory was divided into “kill boxes” measuring 50 km by 50 km. These were declared “open” or “closed” based on the proximity of coalition forces to them, so as to minimise casualties from friendly fire. The ground war was fought mainly by M1-A Abrams main battle tanks and Bradley infantry combat vehicles moving in concert. Fire power was provided by 155 mm and multiple launch rocket system artillery regiments. “Humvee” vehicles provided logistics support.

The potent combination of a “fire and manoeuvre” won the race for Baghdad in what was by all yardsticks a lightning campaign. The “shock and ave” battle plan focused on the psychological destruction of the Iraqis will to fight rather than the physical destruction of their military forces. However, there was fairly large-scale military devastation as well as civilian casualties. Despite PGMs and smart shells, “collateral damage” continued to haunt innocent civilians.

In the ultimate the analysis the Powell doctrine of overwhelming force, including the use of large land armies to win wars lost out in Iraq to the new Rumsfeld doctrine emphasising lean and mean armies, advanced weapons, technology, special forces units and sheer brainpower to defeat future foes. The Indian armed forces have many lessons to learn from Gulf War II. To dismiss the war out of hand as one that is not applicable to the Indian scenario would be most imprudent.

The recently concluded negotiations at Oslo to ban anti-personnel mines are part of the Ottawa Process, begun in October 1996 when 50 States pledged to work together for a total ban on APMs by December 1997. Princess Diana's interest in the welfare of landmine victims and the award of this years'... 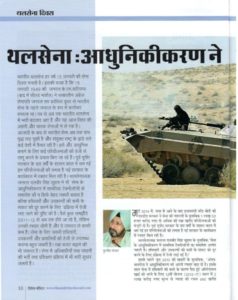 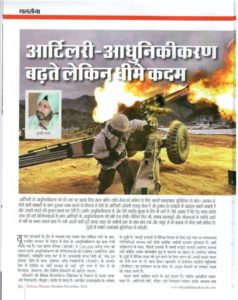