They did it because it is the Indian custom to honour the dead. The dead Pakistani soldiers were honoured despite the barbaric torture of Indian soldiers and the mutilation of the bodies of our brave men. Pakistan's nefarious aim in using mainly NLI soldiers as cannon fodder was obviously to limit the casualties to soldiers belonging to Pakistan Occupied Kashmir so that body bags arriving in Lahore and Rawalpindi do not lead to a national uproar.

Under General Pervez Musharraf, the Pakistani army has done the unpardonable; it has refused to claim its dead. Of the several bodies left abandoned on this side of the LoC, only two have gone home to Pakistan and that too after India insisted that Pakistan take them back

Despite irrefutable evidence furnished by the Indian government regarding the involvement of regular Northern Light Infantry (NLI) battalions of the Pakistan Army in the intrusions at Dras, Batalik, Kaksar and Mushko valley areas of Kargil district, the Pakistanis are stubbornly continuing to maintain the charade that the intruders were ‘Kashmiri freedom fighters’. Perhaps they believe in the Goebbelian dictum that a lie repeated ad infinitum would become a truth.

Unfortunately for them. their credibility has sunk so low that the international community is unlikely to believe anything emanating from Islamabad’s propaganda machine for a long time to come.

Overcoming numerous logistical hurdles, the Indian soldiers brought the bodies of two Pakistani officers to New Delhi and offered to hand them over to the Pakistan High Commission so that they could get an honourable funeral in their own land. Their identity was established through letters from their families that were discovered in their pockets. There was no response from the Pakistanis. It is easy to imagine what the families of the two officers and their friends and colleagues in uniform must have passed through when their nation decided to forsake them. The bodies have since been claimed, but what does one say of the anonymous many, who have had to be buried by Indian soldiers on our side of the LoC?

Many of the dead men were half buried in shallow pits. Some others had simply been covered by rocks and some were left out in the open. All of them were given a decent burial under Muslim rites by Indian troops. They did it because it is the Indian custom to honour the dead. The dead Pakistani soldiers were honoured despite the barbaric torture of Indian soldiers and the mutilation of the bodies of our brave men.

Besides captured arms, ammunition and equipment, a plethora of clinching documentary evidence has been provided by the Army Headquarters at New Delhi to the media and the diplomatic corps, proving the involvement of the Pakistani army in Kargil. The display in South Block included Items of clothing, medal ribbons, NLI shoulder titles and web equipment with Pakistani ordnance factories markings on them, besides a large number of army pay books, identity cards and personal diaries found on the bodies of Pakistani soldiers. The written instructions issued by the adjutant (Captain Ameer) of 12 NLI to a company commander (Major Iqbal) of his battalion, conveying the commanding officers orders for operations over the next few weeks, were found on the company commander’s body at Tiger Hill. A company sergeant major had left behind his parade state books in his hurry to retreat from the LoC.

Among other tell-tale items were a news letter issued by the Military Housing Directorate of the Adjutant General’s Branch in March ‘99, a copy of Pakistan’s Glossary of Military Terms, 1990 edition, ration receipts, issue vouchers for equipment and stores, a leave certificate and even a request for a blood test for a soldier from the battalion medical officer. Personal belongings included letters and greeting cards and some photo albums. A touching letter from Bunty, the wife of Major Asim Ahmed of 6 NLI, spoke lovingly of the couple’s infant daughter and her travails while cutting her first few teeth. Captain Imtiaz Malik of 165 Mortar Regiment must have been quite popular for he appeared to have received a lot of mail.

All the recovered items together convey the picture of a regular army that was going about its business of fighting a war and of individual soldiers simultaneously getting on with their personal lives like other soldiers all over the world, even as artillery shells exploded around them and air force jets pounded their positions with rockets and bombs. Pakistan’s nefarious aim in using mainly NLI soldiers as cannon fodder was obviously to limit the casualties to soldiers belonging to Pakistan Occupied Kashmir so that body bags arriving in Lahore and Rawalpindi do not lead to a national uproar. Only the Pakistani army could have practised such perfidy on its serving soldiers. Commentators the world over are calling it a ‘rogue army’. The title is well deserved.

Political considerations must not be allowed to override international security concerns; and militarised foreign policy should not dictate political discourse. To ensure security and stability, today all nations need to exhibit immense political will, ingenuity and imaginations while dealing with... 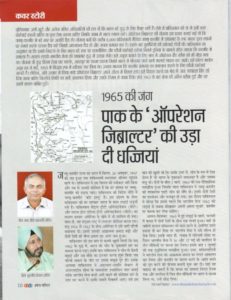 The-employment of the central security 'forces for internal security duties and counter-insurgency operations is mostly ad hoc and diverts their attention and resources from their primary roles.

As part of its grand strategy, China seeks to confine India to the backwaters of the Indian Ocean as a subaltern State and is using Pakistan as a proxy to keep India embroiled in conflict. Pakistan's offensive operations will probably begin in J&K, but may not necessarily remain limited to J&K.Can...