Since the May 1998 Pokhran-ll nuclear tests and India's declaration of itself as a nuclear armed state, India's strategic culture is being gradually reshaped to a more resurgent and vigorous one and India has at long last launched a quest for strategic autonomy.

Almost ten years ago, George Tanham, a senior defence analyst with RAND Corporation — premier American think tank — set the cat among the pigeons when he wrote that India lacked a strategic culture (Washington Quarterly, reprinted in Lancers’ Indian Defence Review, April 1992). Since then many Indian strategists have cited his arguments to support their contention that important national security considerations are still being given the go by over half a century after independence. However, no one has explored the possibility that perhaps George Lanham was wrong and that India does not lack a strategic culture but has always had a very distinctive one. India’s strategic culture has always been one of timidity, of helpless rage — that of behaving as a wimpy soft state. We tend to blame all our problems, like every thing else, on our karma and are historically and culturally habituated to offering the “other cheek” when slapped. Our strategic thinking is plagued by what Jasjit Singh has characterised as the “Panipat Syndrome”.

Perhaps 5,000 years of a “glorious civilisation” conditioned us to suffer in silence being trampled upon by barbarian hordes driven by base instincts. We have always believed that ours is the land of Ram Rajya, of Gautam Buddha and Mahatma Gandhi — the land of renunciation and ahimsa. The defenceless land ravaged through the ages by invaders from the west who powered through the Khyber Pass.

Almost invariably, our response has been to shy away from fighting back — to seek refuge in the moral high ground. In 1948, when the: Indian •••• was knocking on the gates of Muzzaffarabad, we took our case to the United Nations security Council and pulled a stalemate (if not defeat) out of the jaws of victory. In the 1950s, we not only rushed lo recognise China’s sovereignty and suzerainty over Tibet (arguably the real Himalayan Blunder) but failed to ever ask our “Hindi-Chini Bhai Bhai” to settle our land border with them as the price for our support. When China went nuclear, we clandestinely pursued a nuclear research programme and, ten years later, carried out a “peaceful” nuclear explosion— and left it at that.

We were the foremost advocates for a permanent Security Council seat for the People’s Republic of China.

In 1971, we repatriated over 90,000 Pakistani POWs without resolving the Kashmir dispute or extracting any other concession because of our innate belief in being magnanimous in victory. We are the only major democracy in the world in which the headquarters of the armed forces are “attached office” outside the government and are not functionally integrated with the Ministry of Defence. We do not educate our officers in strategic studies. We still do not have a National Defence University. Only a handful of universities have defence studies departments and even these find it extremely difficult to attract students. “Generalist” bureaucrats provide inputs for defence policy decisions to the political leadership. Self-evident and incontrovertible tact.

For decades the Institute for Defence Studies and Analyses (IDSA) was our only strategic studies think-tank. The Indian media lacked journalists specialising in national security. The few articles that appeared on national security were written mainly by retired generals, admirals and marshals and a few former foreign secretaries. Honourable exceptions included General JN Chowdhary’s regular columns in The Statesman while he was still in service.The number of defence and security related journals could be counted on the fingertips and these were mainly professional journals of the various training establishments and regiments or wings of the armed forces.

However, since the May 1998 Pokhran-ll nuclear tests and India’s declaration of itself as a nuclear armed state, India’s strategic culture is being gradually reshaped to a more resurgent and vigorous one and India has at long last launched a quest for strategic autonomy. This is also being increasingly reflected in the writings of India’s strategic and defence analysts. New think-tanks are springing up and new journals are hitting the stands. Newspapers, including the business dailies, now carry national security and defence related news items and opinion pieces almost on a daily basis.

Much as IDSA has been maligned in recent times, it continues to be the leading strategic studies think tank in Asia. Its annual Asian Security seminar, held in January each year, is a landmark event in Asia’s security calendar. In a mutually beneficial arrangement, the armed forces have now started sending three to four research fellows every year to IDSA and the civil services are gradually following suit. The Indian Foreign Service and the Border Security Force have sent one research fellow each. Dennis Kux, the well-known author of Estranged Democracies, has recently joined TDSA as its first international fellow on a Fulbright fellowship Strategic Analysis, the premier monthly journal of IDSA, is well known and is often cited by renowned international scholars though it still has some way to go before it measures up fully to famous international journals.

Despite the gross indifference of India’s national security establishment in the past. IDSA Directors, notably K. Subrahmanyam and Jasjit Singh, continued to plough a lonely furrow and have been instrumental in shaping key defence policy issues. For example, the concept of “minimum credible deterrence” as a viable nuclear policy alternative for India was advocated extensively by IDSA. IDSA alumni are serving on the editorial staff of leading national newspapers and as professors in the international studies departments of universities like Jawaharlal Nehru University. In future IDSA is likely to be called upon to provide consultancy to government departments and be given autonomous projects much like RAND and other reputable think tanks. As the demand for national security analysts is now burgeoning, other newly-established think tanks will also grow exponentially in the decades ahead.

Among Indian defence journals in the private sector, the foremost in spreading awareness of critical national security issues has undoubtedly been Captain Bharat Verma’s Indian Defence Review, established in 1986. Mostly ignored, often boycotted and even banned but never encouraged by the defence establishment, this journal from the Lancer stable has soldiered on tenaciously and provided retired as well as young Indian defence writers a platform to express their views.

The Indian Defence Review has enjoyed a dedicated core readership within the country’s strategic enclave and among the decision makers. Following a fiercely independent editorial line, this journal has done more for creating a national security consciousness than perhaps most other journals out together. India’s newfound strategic autonomy and the ever increasing threats to national security have – spawned several new strategic journals. Noteworthy among these are Brigadier Nair’s Agni, Major General Afsir Karim’s Aakrosh and former DG Police KPS Gill’s Faultline. All of them together are encouraging new thinking and making a significant contribution to furthering debate on important strategic issues.

It would be unfair to leave out the sterling impact of the reports of Parliaments Standing Committee on Defence (SCD). Ever since the system of detailed scrutiny by bipartisan committees was introduced about a decade ago, the SCD has turned the spotlight on the functioning of the Ministry of Defence (MoD) and has highlighted several shortcomings. Combined with the reports of the Comptroller and Auditor General (CAG) of India, the deliberations of the SCD have served to bring about greater accountability in the functioning of the MoD and have focused attention on the need for better coordination of effort between the MoD and other ministries of the government connected with national security.

The appointment of the Kargil Review Committee the prompt publication of its report, the despatch with which its recommendations were evaluated by four task forces nominated by a Group of Ministers (GoM) and the ongoing exercise to implement the suggestions of the GoM, are representative of a new awakening. National security is now getting the attention it deserves and India is shedding the diffidence and indifference of the past in its quest for strategic autonomy.

These recent developments will usher in a new era of national security consciousness in keeping with India’s goals and aspirations as an Asian and, later, a world power. 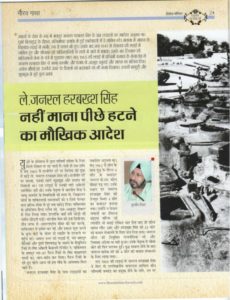 Good battalions are known to have even launched counter-attacks to bring back custom of war, the Pakistan army refused to take back the bodies of four of its regular soldiers directly from the Indian Army during the Kargil conflict, and finally did so only under international pressure through the...